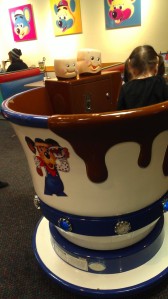 I learned another valuable lesson in Christ-likeness on Saturday. Like so many of these lessons, I learned this one from a child. In this case, my mentor was Eliza, our 2 1/2 year old daughter.

The scene was less likely than the teacher; we were at a Chuck E Cheese’s for a birthday party of one of Eliza’s friends. Everyone was (seemed to be) having a great time, and all the kids, across the age, ethnic, and demographic spectrum were all playing well with or around each other.

Eliza’s favorite was the “teacup” which you see pictured here.  It is actually more a hot chocolate cup, but who am I to bicker?

Here was my lesson: After waiting her turn for the cup ride, Eliza happily climbed in and inserted the requisite token.  Not long after the cup started spinning, another child came up, climbed in, and sat down next to Eliza.  This was not a child from our party, nor was it someone we knew.  I didn’t see a parent in the area.

I was ticked.  Who was this other child coming up and horning in on my daughter’s tokens=worth of a ride?

Before I could say anything, though, Eliza caught my eyes, grinned warmly, and said, “A friend is riding with me!”

I quickly realized how selfish my own thoughts had been.  It was tricky, because I had disguised my selfishness for my daughter inside thoughts of protections and making sure she was not taken advantage of.

And she was just happy to have someone to share the ride with.

At that time the disciples came to Jesus and asked, “Who is the greatest in the kingdom of heaven?”

Go and do likewise!

2 thoughts on “Becoming like Them; or, A Lesson in Childlikeness”