I would like to tell you the answer to that question is “NO!”  But that might be a bit hasty.

I recently took the IAT (Implicit Attitude Test) for racial bias.  I did not do as well as I wish I had.

The IAT offers a variety of tests, all designed to identify the relative strength of a person’s positive or negative associations of a variety of issues. 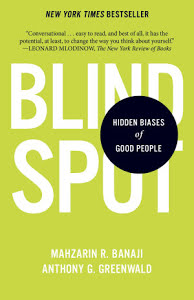 I first learned of the IAT earlier this year when I read Blind Spot. It’s a fascinating read and I highly recommend it.

But I’m sharing this now, rather than when I  read the book because the challenge of bias came up the other day and I got to be part of a very interesting discussion.

In a group of people who were all my age (55) or older and all of us anglo, we talked about the incredible progress that we have made as a society over our lifetimes.  I don’t think there is any denying this, but at the same time, I feel the need to be sensitive to people who don’t feel like we have made enough progress.

So I shared this thought, based on my own taking of the IAT and learning that I have a slight bias against people of color:

The real challenge before us all is not trying to convince ourselves that we have moved beyond bias, but being honest enough with ourselves what bias we do have.

Because you can only lessen your bias if you are willing to identify it. The IAT can be a helpful tool to do this.